What Mary Thinks: Updates on my husband and Inspiring Generation / Age of Feeling 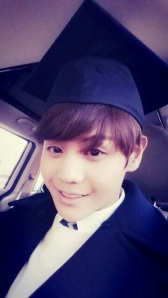 Hello everybody! I hope your weekend is going well so far~

I’m actually supposed to be studying, but I’m just browsing on websites because I don’t want to think about school and the Calculus test I am going to be taking on Tuesday and Wednesday (my struggles). So since I’m bored right now, I decided to write a post!

So on February 14, my husband, Yang Yoseob of B2ST, graduated from his college! YAY. *sings the congratulations song and throws confetti, but accidentally swallows on some and chokes only to be saved by Yoseob who performs CPR on me* I feel really bad, because I did not even know, like I did not have one single clue, that Yoseob was still attending college. Maybe this explains why he finally graduated after six years at the university. Even though it took him longer than expected to finish college, I’m glad that he pursued his education and continued to do his best to attend college until graduation. This just shows his passion and commitment to his responsibilities, because Yoseob didn’t have to attend college since he could have chosen to just focus on his activities with BEAST, but the fact that he chose to go to college says a lot about him (this is why he’s my ultimate bias and husband). I’m glad that he didn’t quit and kept on persevering even though it took him six years to finish school. Granted, it took him that long because he wanted to help BEAST reach the top and so he spent more time with BEAST than he did at school, but all that matters is that he finished school successfully which makes me, his wife, extremely proud of him for doing so. Congratulations Yang Yoseob and I wish you all the best in the future! 🙂

Now time for the bad news. So a few days ago, it was announced that Korean drama ‘Inspiring Generation’ would be going through some major changes. First, it was confirmed that the main writer would be leaving so a new writer would be stepping in to fill the old writer’s shoes. I hate to jump to conclusions so easily, but I’m feeling a bit iffy and scared about this sudden change in writers. Usually when something like this happens, the drama for the most part goes into a totally new direction and loses the momentum and suspense that it created in the beginning of the drama. Knowing that the drama is only ten episodes in out of twenty-four makes me really concerned. I really liked what the drama offered the first eight episodes to the point where I was obsessed with the drama. I had major feels for this drama (as you can see here: https://marymekpop.wordpress.com/2014/02/03/spazzzzz-sunday-the-awesomeness-that-is-inspiring-generation-age-of-feeling/) for so many reasons I hope that the new writer does not mess the beautiful drama up. Because of this fear of change, I haven’t watched episodes nine and ten yet in which I should, but I’m just scared that everything’s going to change and the love that I have for this drama will slowly wither away. I honestly don’t want to be let down, because this was what happened to me with ‘You Who Came From the Star’ and ‘Prime Minister and I.’ I really loved those two dramas, but then my interest and love for it died down halfway into the dramas because they started to drag and get boring. ‘Inspiring Generation’ was great so far judging from all the episodes I’ve watched, I wish and hope that it will continue to do great. Other than the writer change, it was also confirmed that Kim Jae Wook, who played our second male lead Soo-ok, will be leaving the drama. Ugh, my heart shattered into a million pieces when I found out this horrifying news. You can’t take away the character that motivated me to watch this drama; You can’t take away the actor that portrayed his flirtatious and beautiful character so well away from me. I’ve never seen any of Kim Jae Wook’s past works before, so this drama was the first drama that I’ve watched him in and he was just so amazing and full of presence when he was on screen. I anticipated him and his character the most out of all the cast members and when he appeared in episode five, I was smiling from ear to ear. I was in love with the actor, I was in love with Soo Ok. Kim Jae Wook just played Soo Ok so well and it’s so sad knowing that we won’t be able to see any more of him. I know that Soo Ok was just this random guy that didn’t really contribute to the plot line of ‘Inspiring Generation’ much, but his character was just so fluffy and happy and brought out so much optimism and light in this dark and violent drama. I also really loved his scene with Ok Ryeon as they were so cute together; I had even begun to ship them as a couple! I’m not exactly sure as to why Kim Jae Wook decided to leave, but I hope to see him in another movie or drama soon where he plays the male lead (he deserves one) along with an actress that I support and love as well. It’s so heart-breaking to know that he’s gone. When I watch episode nine and ten, I will forever be reminded that Soo Ok doesn’t exist in this drama anymore which will make me all the even more hurt and sad, because he lit up this drama with his adorable presence. So long Kim Jae Wook and Soo Ok. It was awesome watching you in this drama while you lasted.