An Update from Mary!

(HERE. HAVE SOME BAEKHYUN.)

HEY EVERYONE. How have you guys all been?! So I know that it’s been more than a week since I’ve posted on this blog and I am so terribly sorry. I sincerely apologize to all of my visitors and readers who continued to visit my blog, but was updated with absolutely nothing at all. I know I continue to use the excuse of school, but it’s true – I’ve been really caught up trying to raise that grade in my AP Calculus class which I absolutely hate by the way, so I gotta focus on school right now before I can start updating this blog again. 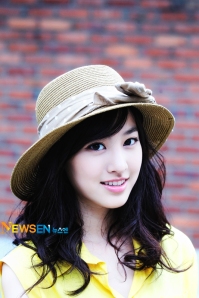 I’m currently not watching any Korean dramas right now although I think I might watch ‘Doctor Stranger’ starring Lee Jong Suk, Jin Se Yeon, Park Hae Jin, and Kang Sora. The teaser looked decent, but it wasn’t until I saw the pictures/stills of Lee Jong Suk and Jin Se Yeon riding bikes together that I was like, “Wow. They look REALLY compatible with each other.” And this is coming from a hardcore shipper of Jin Se Yeon with her Gaksital co-actor Joo Won. As I’m a fan of Lee Jong Suk and Jin Se Yeon (yes, I know surprising, but I am a fan. I’m in the minority here), I look forward to this drama. Park Hae Jin is another one of those actors that I’m not a fan of, but it wouldn’t hurt to see him in a drama because he’s super handsome. I’m not a fan of Kang Sora either, so I don’t really have any opinion of her. Another drama I plan on watching is ‘Witch’s Romance’ starring Uhm Jung-hwa and Park Seo-joon. It’s weird, because I don’t really care about Uhm Jung-hwa and Park Seo-joon because I’ve never really watched any of their movies or works and plus I’m not a big fan of Noona romances, but for some reason, one day I must have woken up and decided to watch this drama because of Park Seo-joon. I’m like, he’s cute, he’s handsome, I am willing to watch this drama because of him even if I’m not a fan of Uhm Jung-hwa nor Noona romances. The teasers were released and they look funny and witty, something I can find myself enjoying. If the first few episodes are also good, I will do recaps for it so I’m crossing my fingers hoping the series is great.

A few weeks ago, I wrote about a short review about ‘Hot Blooded Youth’ or ‘Hot-Boiled Youth’ and how I could do a recap of that movie if you guys requested. Since my Spring Break starts this weekend, I can get around to doing a recap of the movie for you guys. I was also thinking of watching ‘Hwayi’ starring Yeo Jin-Goo and if I find that movie somewhere online and enjoy it, that will be another movie I will recap (if I have the time). I kind of miss doing recaps and reviews since I haven’t been doing that for the past few weeks and I need to get better at it, soooooo if there aren’t any Korean dramas capturing my interest right now, why not just do movies?! Hehe. Problem solved!

As for K-Pop, Akdong Musician finally made their debut after many postpones with two title tracks ‘200%’ and ‘Melted.’ Of course, I prefer ‘Melted’ (I actually like it, A LOT). The first listen and I was just like, wow, someone remind me again that these siblings are just 17 and 14. I especially love their debut album, not because their genre of music is something that I like listening to, but also because Lee Chan-hyuk, the brother, composed ALL of the songs to their debut album – their debut album. Talk about being talented and impressive. Then Lee Soo-hyun is not only adorable, but can also sing so well and again, she’s only 14 years old. 14 YEARS OLD. I know, I couldn’t believe it at first. Provided below is an audio of ‘Melted’ while the one under that is of AKMU’s debut performance on K-Pop Star 3 where they both did a fabulous job. I love the eerie and mysterious vibe. (In fact, I’m thinking of doing a cover of ‘Melted’ since I like it so much. Haha).

I have also been really addicted to solo artist Crush’s new single ‘Sometimes.’ I am a sucker for good R&B songs and this song happens to be one of them. Not only does Crush’s smooth and delicate vocals add a lot of depth and greatness into this song, but just how the song is sung overall sounds really nice…it’s addicting. At first I didn’t really care for it, but then I kept on listening to it, then I realized that I liked this song – a lot. IT’S SUPER GOOD SO YOU SHOULD LISTEN TO IT. JUST CLICK AND LISTEN.

Another song I’m recommending you guys is NS Yoon-G’s ‘If I Love You’ which was released from her most recent work ‘The Way 2.’ ‘If I Love You’ is an album track featuring Duble Sidekick (who I love by the way) and is another R&B track. The first ten seconds and I was already in love. It’s a great song in every single way possible. I REALLY recommend you check this song out, because you’ll regret it if you don’t.

So that’s all that I have for you guys. I apologize again since it’s been forever since I’ve lasted updated. But since tomorrow’s the last day of school before a week of Spring Break, expect many more posts from me including recaps and reviews! WOOT WOOT. I hope you guys have a great morning, afternoon, evening, night, whatever time it is you’re reading this post right now. Bye-yum!^^

One response to “An Update from Mary!”