So I know I had started on the recap for episode 1 of SMTM4 but I’m sorry to all the fans and followers of my blog and the show, but I am seriously contemplating on whether or not to continue recapping the show. After episode 3, I have come to the conclusion that I might not even watch the rest of the show anymore for many reasons and I’m sad to say that I just don’t enjoy this season, especially if I was to compare to it last season which I actually kind of enjoyed.

However, even though I might not want to recap the show anymore, I still do want to express my thoughts on episodes 2 and 3 since A LOT has happened within the weeks that it has aired. There’s been so much controversy and drama erupting and going around since the show has aired (even before the show aired actually) and we’re only 3 episodes in. I can imagine a lot more happening in the future which is why I’m kind of hesitant on recapping the rest of the season if I choose to.

I’m just gonna make this as short as possible and my opinions and thoughts on the following will probably be very unpopular but I hope y’all will respect my opinion and thoughts and if you wish to share with me and others what you think about the show so far, I welcome you to do so too 🙂

In episode 2, we continued off with Mino and Taewoon’s auditions in which both passed unsurprisingly. The second round of auditions focused on the contestants performing in front of all the judges on stage. Contestants are given a minute to rap with music this time in front of all the judges. If they impress, the judges will pass them. If they fail to impress, the judges can press the fail button to their liking and wish to fail the contestant if they choose to do so. I didn’t really care for anything too much in this episode except for the elimination of P-Type which really pissed me off. It just doesn’t make any sense that the judges would eliminate him just because he forgot his lyrics during his performance (in which I might add he picked right back up even though he forgot some words). I just don’t understand why P-Type would get eliminated for that (but then again I don’t understand why he was a contestant in the first place. P-Type baby, just do yo thang). Like I understand he’s a Sunbae with 15 years of experience and so there are high expectations set for him but he forgot a few words and because of that the judges felt the need to eliminate him when they were more lenient towards others who forgot their lyrics. 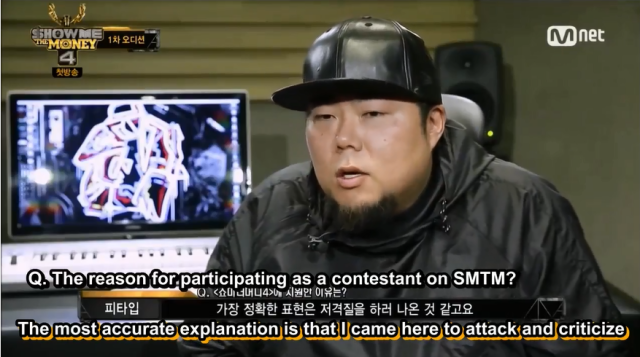 The judges talk about being fair and equal to everyone but let’s be real here, they are biased and they choose favorites and like certain contestants more than others. I think everyone, even the judges themselves, knew that P-Type would win the show if he was to continue on to the next rounds (which means less drama which means less money) and knew that he was a threat to everyone, even the judges themselves, so they just wanted to find a reason to eliminate one of the stronger contestants on the show and when that reason came (P-Type forgetting his lyrics) they decided to grab at it right away which is so ridiculous to me. They didn’t eliminate P-Type because he wasn’t good enough or he didn’t impress or whatever (the judges know what P-Type is capable of), they eliminated him because he forgot his lyrics. All the judges and contestants knew he was too good for them so they wanted him to go as soon as possible. It’s ridiculous really. This situation reminds me of what happened to Snacky Chan last season when he got eliminated from Team YG because he was already good enough and Team YG (who Snacky had chosen to be with) felt like there was nothing they could do to help him become better so they saved Yook Ji Dam’s ass over Snacky. But I mean at least there was Iron and Giriboy and Hanbin and Bobby to save the rest of the season. Unfortunately there isn’t really anyone much that can do that this season. Ugh. SMTM4 is such a mess.

It wasn’t until episode two that I found out that Lil Boi of Geeks was a contestant on the show. For those of y’all who don’t know, Geeks is one of my all-time favorite Korean hip-hop groups and groups in general. They always come out with great music and both Lil Boi and Louie are talented rappers and artists. I’ve been a fan of theirs for quite a few years now and I look forward to see what else they have to offer in the future. Episode two gave Lil Boi some screentime (whereas in episode one he wasn’t given any) and that was where I found out that he was on the show. I was so ecstatic upon finding out that he was on the show because I love Geeks and I love Lil Boi. Not to forget, his solo performance was seriously damn so good and powerful and you could tell that he is obviously one of the more stronger contestants on the show. He managed to impress Jay Park in the first round of auditions (Jay Park got goosebumps listening to Lil Boi’s rap) and Zico confessed to saying that Lil Boi is his favorite MC. I’m just over here like HELLLLL YEAAHHHHHH. THERE YOU GO MY LIL BOI. YOU DO YO THANG. And he did his thang in episode two during his solo performance, earning an “all pass” meaning that all the judges loved his ass. I was also so impressed by his performance (great song choice too btw) and his rapping and his delivery and his energy on stage and everything was perfect. After Lil Boi’s performance, all the contestants who had watched him knew then not to mess with Lil Boi which is why in episode 3 they didn’t.

OMG LOOK AT THAT CUTE SMILE OF HIS UP THERE IN THAT PICTURE. He has the cutest giggle too. He’s always so happy and cute and giggly “hehehe.” I love Lil Boi ❤ 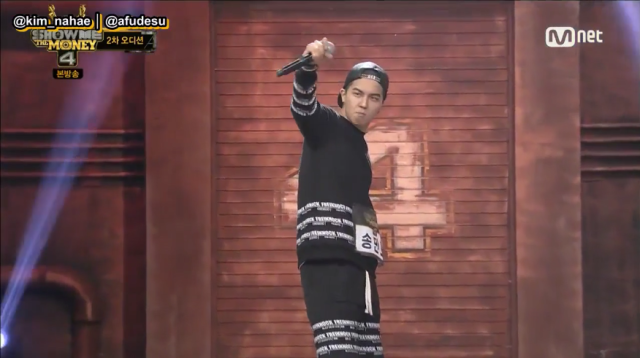 Then unsurprisingly, we end the episode with Mino’s performance and it’s nothing great or mind-blowing. In my honest opinion, I had expected Mino to do better since there’s a lot of hype for him on this show but he’s doing okay at best so far and I’m hoping that he’ll step up his game in the future episodes. Maybe he knows that he’s the most anticipated contestant on the show so he will move on to the next rounds regardless that he’s showcasing such weak and mediocre performances compared to the other contestants. I really hope he doesn’t have that mindset or if he does gets rid of it. I just expect more from Mino knowing that he was once underground and managed to move his way to the top, now being in a popular group from YG and making lots of money or whatever. Also, he threw some disses out in his rap, in particular to Yano and Kidoh of Topp Dogg and then also mentioning EvoL claiming that he doesn’t like it when reporters associate his name with “nugu’s” and I just thought it was so funny because Mino himself was once a nugu. I don’t know how many years of attempts and tries he made to finally be in the spotlight he is now and now after being in YG and finally successfully debuting and being better off than the groups he mentioned, he thinks he can diss Topp Dogg and EvoL like that (correct me if I’m wrong but they haven’t even done anything to him?). I wished Mino remained humble because we all know how hard it was for him to finally be where he is right now (not debuting in Block B so he moved on to Bom but even then that wasn’t successful so finally getting picked up by YG and the rest is history). C’mon Mino. I just thought you would have known better for being a nugu yourself for so many years. Lol. Pick up your game.

There are contestants on the show that impress me such as One from 1Punch (who I think is actually pretty good) or Basick (who I don’t know a lot about but have heard his name a few times) and even Black Nut (yes, Black Nut). Black Nut is very controversial right now for his horrifying lyrics about raping and murdering his junior high school friend but in this context I’m talking about him as a contestant on the show.

I think Black Nut is a very witty person and he’s also very intelligent too. In episode two, he criticizes the judges (much like B.I. did during the second round of auditions last season too) and then at the end jokes around and apologizes so he can move on to the next round. I also like how he’s playful, already claiming that nothing matters because Mino is already going to win the show. He doesn’t take this show seriously (neither do I and many others) and came as a contestant for them fame and girls which sounds reasonable to me. I mean, if you have priorities, you have priorities. He’s also a good rapper too you gotta admit even if you don’t like him. He has a pretty smooth flow and his delivery is on point.

I know that there was also a lot of fuss over Seventeen’s Vernon making it to the next round even though his performance was lackluster. I watched his performance myself and yes, he did not do good and his performance was less than decent. Yes, he should have been eliminated for the performance that he put on. But I actually don’t think Vernon is a bad of a rapper as people make him out to be (and I’m saying this as a person who’s not a fan of Seventeen at all). He’s still young so there’s still room for improvement but I think for his age and for what he’s shown so far, he’s actually pretty damn good. I was impressed by his rapping skills because I hadn’t expected that from him at all. It’s unfortunate that he’s the target of everyone on the show because everyone else feels like they’re more worthy than him and better at rapping than him and should earn more popularity and attention than him but Vernon isn’t that bad. I don’t even know why AndUp gotta be all over Vernon and criticizing him and idol rappers like they’ve done something so bad to him. It’s kinda funny because I personally don’t think AndUp is all that like he makes himself out to be. His rapping is not any better than Vernon’s to be honest.

Along with the elimination of P-Type, I’m sad that Yano and Kidoh of Topp Dogg also got eliminated because we all know how good they are at rapping. It’s sad that they weren’t able to showcase all they got when they were on the show but I hope this doesn’t discourage them from continuing to rap and make more music. 🙂

I was originally going to combine this ‘Discuss Away!’ post with my thoughts and opinions about episode 3 too but I notice that I wrote way more than I had planned to so I’m going to write my thoughts on episode 3 in another post right after this one. Look forward to that post too because I have a lot of great things to say about the third episode which was the episode that heavily disappointed me.