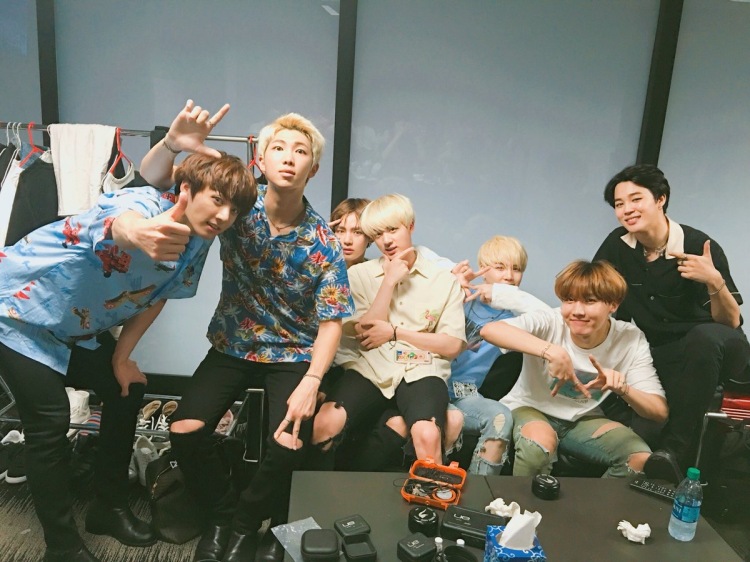 Wowow, look at my babies rising and soaring. Just when you thought they could possibly be at their peak, they continue to surprise you even more and make you even more proud.

It was confirmed by Big Hit Entertainment that BTS would be performing at the American Music Awards later on this month on November 19, 2017 in LA. This would mark their first U.S. debut performance where the popular boy group will be performing their latest title track ‘DNA’ in front of other popular American artists and celebrities – some that the BTS members themselves listen to and support.

While this is great news in general, a part of me has mixed feelings about all this attention that BTS has been receiving. They’ve been getting a lot of love calls lately from different folks like Ellen DeGeneres, Desiigner, Steve Aoki, and the Chainsmokers just to name a few and while I appreciate and am glad for all the support, love, and interest, I feel like BTS is growing so much at such a fast rate. Granted, it took them 4 years to finally get to where they are now and they’ve worked hard these entire years, but a part of me also really misses those times when they weren’t as popular and in demand as they are now. Not only because this creates more concerns for me in terms of more schedules and activities which could lead to an increase in health concerns, but also because how genuine and sincere are these folks and news outlet about BTS? Do they actually really care about the boys and their music or are they just creating news articles and stories about them for clicks and money? As a fan who’s been there since debut, I’m glad and am so proud of my boys for working hard to get to where they are now. They deserve it and so much more, but I’m afraid for the outcomes and results that are to come out of this. I’m not really sure what’s going to happen next and I think I simply just want to enjoy these big moments as they trickle in one by one instead of it all happening at the same time.

In terms of their performance at the AMA’s, I also do wish that BTS would perform any other title track other than ‘DNA.’ While the song is cute, bubbly, and a fun song to listen to, BTS has many other wonderful, stronger, and powerful title tracks to perform to. Most notably, ‘Blood, Sweat, and Tears’ would have made for a great performance as witnessed at BTS’s performances at the end of the year award ceremonies last year. I would actually love to see something similar to BTS’s ‘BST + Fire’ performance that they had last year at MAMA. That performance was so iconic; it was straight up fire and that’s the type of stuff that I want to see at the AMA’s especially since it’ll be BTS’s first debut performance in the U.S. We wanna make this memorable and even though it will be memorable, I want it to be memorable with an even more memorable title track. Although it’s a shame that BTS will be debuting with ‘DNA’, I am just glad to know that they’re making their mark in music industries around the world. Having achieved most (if not all?) of the goals that they wanted to achieve with this last comeback, their next few comebacks will probably be much bigger and more successful. Who knows what is going to happen next time if ‘Love Yourself: HER’ was such a huge hit, having sold a million pre-orders?

I probably won’t watch the AMA’s simply because I don’t have a TV, but I’ll be tuning in on Tumblr and Twitter and maybe even catch a live stream of it somewhere. I wouldn’t want to miss this iconic and amazing moment that is both as meaningful for us as it is for BTS.

ARMY’s, are y’all excited for this?!