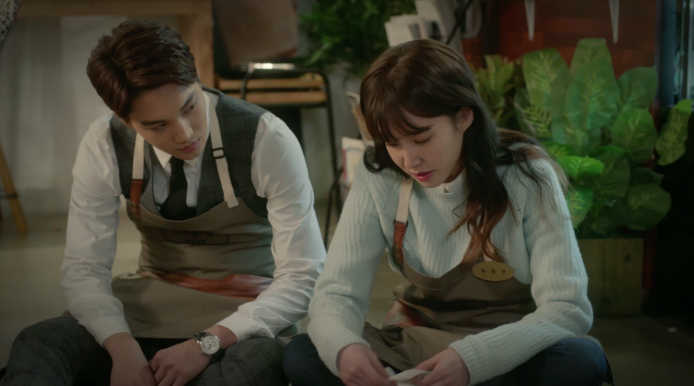 While episode one focused more on our male lead Eun-haeng, episode 2 shifts its focus on our female lead Cho Co. Through this heart-warming episode, we learn more about her, her passion, and who she is.

The second episode turns its attention and focus on Cho Co, our Choco Bank owner who has loved chocolate ever since she was a little kid. She was able to fulfill her dreams of owning her own chocolate shop by owning and opening Choco Bank.

But unlike what she expected, her shop did not become so successful. Her only visitor to the shop is her landlord (played by Kim Young Hee) who reminds her how much she’s owes her. Cho Co pleads her landlord to give her another month. Just one more month and she’ll pay off 3 months worth of rent to her. The landlord suggests visiting the bank to pull out loans so she can pay off the money she owes her landlord. Even though Cho Co refuses to and declines, she is forced out of the shop by the landlord.

Back at the shop, Cho Co whines and complains to her now employee, Eun-haeng, about the loan and reminds Eun-haeng that it was his fault she had to do all of this. She yells at him to a better job at sweeping the floors, but Eun-haeng can’t take it any more. He’ll get her the $5,000 she lost.

Through Crowdfunding, Eun-haeng helps Cho Co raise $5,000 on the website. She’s excited at the news and the results, but Eun-haeng realizes that she doesn’t really have a business plan – which probably explains the reason why her business is failing. While he suggests it’s important to know about the statistics of her financial and general management, Cho Co believes that as long as she just makes good chocolate for people to eat, she’ll be fine. 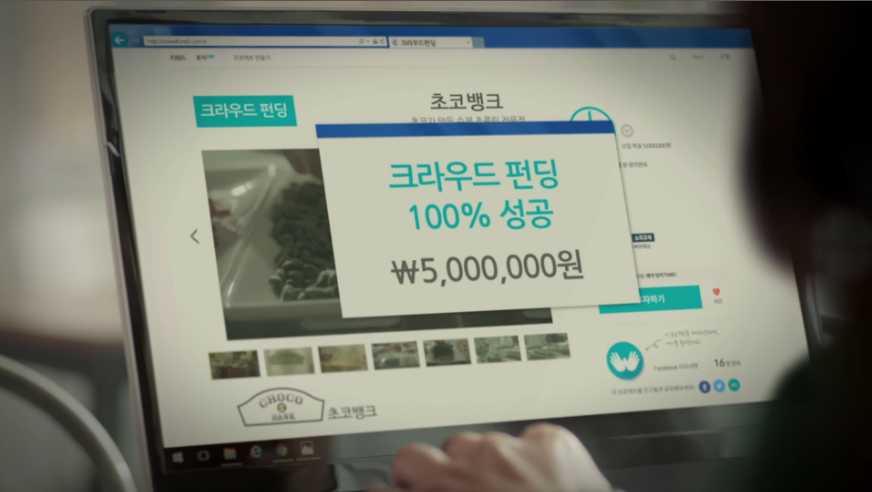 Eun-haeng, who clearly doesn’t agree, loses all hope and finds his part in helping her raise the $5,000 done. But Cho Co has something else in mind. She proposes that they both become partners: she’ll worry and focus on making the chocolate and Eun-haeng can deal with the financial and general management of the shop. Eun-haeng refuses at first, but when he receives a text from his mother about the reservation at a steakhouse she made for her friends, he gives in to Cho Co and agrees to work for her for just a month.

Working with Eun-haeng has proven to be beneficial for Cho Co in many ways. With his help and assistance, she learns about this thing called “online banking” where she can look at her bank information and account without actually having to go to the bank and she begins to receive customers. Working together has helped Cho Co and Eun-haeng become closer it’s as if they almost might have feelings for each other. One night, a group of 3 female customers are amazed and in love with Eun-haeng after he helps them pay for their dessert. Cho Co witnesses this and grows a bit jealous at the attention that Eun-haeng was receiving from the female customers. Afterwards, Eun-haeng goes to meet with Cho Co and asks her about a cake that she made. The frosting on the cake writes “I’m kill you” which is grammatically incorrect as Eun-haeng points out. He assumes that she might not have been a good student in school to which she refutes by saying that she graduated and even went to college in France. Haha.

It’s peaceful at the shop so far until a customer enters the shop. He’s busy talking on the phone, but quickly tells Cho Co his order before going back to talk on the phone. It’s a bit too fast for Cho Co to remember the guy’s order so she tries to ask him for his order again, but before she could successfully do so, the guy’s phone call abruptly ends and he grows mad. He blames Cho Co for ruining his phone call to which Eun-haeng becomes impatient and criticizes the customer. Just as the customer is about to hit Eun-haeng in the face, Cho Co comes running at the customer with her “I’m kill you” cake and smashes it onto his face before he can do anything else. Aww, the cake looked good too.

As they clean up the mess, Eun-haeng confides in Cho Co and confesses that while she has everything easy, he’s had a hard time – especially finding a job. In response to his sad story, she tells him a sad story about her friend who was raised by her grandmother because her mother died and her father abandoned her. She ended up sacrificing her education to chase after and fulfill her dreams of becoming a chocolatier, eventually becoming one. This story about this “friend” was none other than about Cho Co. She adds that even though she might have had a difficult life, she doesn’t want that to get in the way of her living her life.

Even when things get hard, I want to live sweetly and happily, like chocolate.

In the midst of all this confusion and tension, a young male suddenly shows up at the shop and excitedly runs towards Cho Co, giving her a tight squeeze in his arms and exclaiming, “I missed you Mal-nyeon nuna!”

I’m glad we got the backstory that I stated I had wanted in my recap of the first episode. It was really nice getting to know more about our two main characters and especially about Cho Co in this episode. You can witness her passion for chocolate through the hard work, effort, and sacrifices she’s had to make in order to run and maintain her Choco Bank shop. She’s always been determined and even though she’s faced plenty of difficulties and obstacles growing up, she never let that prevent her from achieving her dreams of opening up her own chocolate shop. And even when her shop wasn’t doing so well as she had wanted and expected, she never once gave up. She kept on going and persevering. It’s these traits and aspects of Cho Co that makes me full-on support her and root for her. She might not be the most intelligent lady, but her power and her strength and her wittiness is what gives her a simple but nice outlook on life that makes her so unique and awesome.

It’s obvious that by working with each other as business partners and spending more time with each other, Eun-haeng and Cho Co are starting to slowly develop feelings for each other. I loved the scene at the end when Eun-haeng stated that he would make Cho Co happy, but when questioned why he would do that for Cho Co he was also just as confused. Is it maybe because he’s unknowingly developed feelings for her that he doesn’t know he has yet or realize he has yet and wants to make her happy? Or is it because he feels sorry for the difficult and sad life she’s had growing up? Why would Eun-haeng want to make Cho Co happy? And more importantly, HOW will he make her happy?

It was so sweet witnessing Eun-haeng and Cho Co open up to each other. They told each other their life stories and their concerns that they might not have had told anyone else. It’s little moments and scenes like this that makes you feel all fuzzy and warm inside. They’re slowly confiding and opening up to each other and are starting to feel comfortable around each other. They might just see each other as business partners for now, but their relationship could possibly evolve into something more if this pace continues.

I’m assuming that the young man at the end of the episode, played by actor Yeon Joon-seok, is going to be our second male lead. I actually recognize him as the young child actor who played Kim Nam Gil’s character in Shark and was actually really interested in him, but never cared too much to follow him. I’m glad to be seeing him active and best yet in this drama. I’m curious as to who he is and how he knows Cho Co (or shall I say Mal-nyeon since that’s what he called her as soon as he saw her). I’m also assuming he’ll be a competitor for Cho Co’s love and attention. Maybe it might not be so easy for Eun-haeng to make Cho Co happy like how he had wished before now that there’s another guy in the picture.

While I love Yeon Joon-seok, a part of me wished that the drama would have just stayed the way it was – with our Eun-haeng and Cho Co working together and coming together to help and achieve each other’s dreams without any outside intervention from anyone. It would have been nice to witness them both grow closer as time goes by and face any obstacles ahead of them together so they both recognize how well they work together. I guess this realization will only come with the addition of other characters, including the second male lead at the end of this episode. How bittersweet.