Hi everyone! So I know this has been so overdue for such a long time, but I thought I would resume and complete my recaps on Korean drama ‘Choco Bank.’ I had started recaps on the drama more than a year ago, but stopped due to inactivity. I’m back now and I’m planning on finishing the recaps. I also apologize for the sudden halt on the recaps; it was unprofessional of me and I’ll try to never do something like that again.

Hopefully after having received your forgiveness you’ll join me in on the rest of this journey with our characters Cho Co and Eun-haeng as they pursue their respective dreams and goals. Let’s goooo! 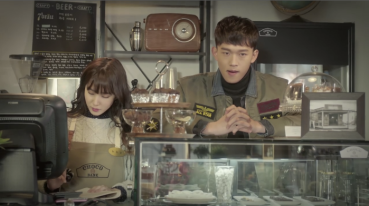 Fast forward to the present and Dal-soo wants to work for Cho Co. At first she declines, but it’s not until she witnesses Dal-soo’s amazing ability to attract customers that she hires him. Hahaha. Eun-haeng grows upset, questioning Cho Co whether she’s really going to hire him to work for her. If Dal-soo’s able to get sales to increase more so than she’s ever been able to then why not? Haha. Eun-haeng disapproves and reveals that he would never do anything like that even if she paid him…

But he does. He engages with the same exact ahjumma customers that Dal-soo does and advises them on bank-related information. Dal-soo grows jealous at how much Cho Co is admiring Eun-haeng and complains to her but she’s not having it. She demands for him to take out the trash, but maybe she shouldn’t have done that. While throwing out the trash Dal-soo finds Eun-haeng’s resume and calls him out on it in front of him and the customers.

Eun-haeng is actually unemployed and has been unemployed for 5 years. He’s just scamming the customers and doesn’t actually know what he’s talking about. Embarrassed and furious, Eun-haeng runs out of the shop. Cho Co follows after him and finds him ready to get in a taxi. However, he stays behind to check up on her after she almost gets run over by a car while crossing the street to get to him. He yells at her for almost getting run over.

While Dal-soo waits for Cho Co to return to the shop, she and Eun-haeng join each other for food. Cho Co encourages Eun-haeng to start his own business since he seems like he’d be pretty good at it, but we find out that Eun-haeng’s mother is against the idea. His dad was a businessman but his business went bankrupt before he passed away which made his mother paranoid ever since. Since then, Eun-haeng’s mother has only wanted Eun-haeng to get a stable job and has refrained him from starting his own business.

Upon hearing this Cho Co grows sad but she cheers herself and Eun-haeng up by encouraging him to be happy. If he’s happy then he can share that happiness with his mother too and in return she’ll be happy. Cho Co vows to make Eun-haeng happy but he doesn’t understand why she would do that. Just when Cho Co is about to confess to Eun-haeng, Dal-soo comes running to them and hugs Eun-haeng tightly. Having discovered about Eun-haeng’s late father he grows apologetic and guilty for how he’s treated Eun-haeng. While Dal-soo pleads for Eun-haeng’s forgiveness, Cho Co watches the two make up. She smiles quietly thinking to herself how clueless Eun-haeng is that he’s the reason why she’s so happy.

We return to 3 months ago with a shy Cho Co trying to get people out in the public to try her handmade chocolates. She’s unsuccessful until Eun-haeng comes across her and is the first to give her chocolate a try. He compliments it and then walks away while Cho Co stares at him admirably.

My goodness, it’s been over a year since I’ve last watched this drama but my original thoughts still hold same and true: this drama is so pretty. Every shot is just so visually pleasing and the cinematography is something else. It’s colorful, vibrant, and bright and you fall in love with how beautiful the drama is filmed and with how beautiful our leads are.

It feels weird to see Park Eun-bin play a much more toned-down and less funky character compared to her character in ‘Age of Youth.’ I’m reminded of her character in ‘Age of Youth’ while I’m watching this drama and it makes me miss her loud, out-going personality even though I know I shouldn’t make that comparison because I’m watching two completely dramas lol. With that being said though, she’s doing such a great job as Cho Co and you understand why or how Eun-haeng managed to find a way into her heart. He was the first person willing to give her life-long dream a chance and made her feel better at doing her job too so of course he would be an important person in her life. While it’s great to see her side of the story and why she’s in love with him, I can’t wait to learn about Eun-haeng and what aspects about Cho Co he’s in love with. What about her makes him attracted to her? Does he even like her in the first place? Does he have feelings for her that he’s denying or maybe isn’t just aware of yet? I hope to have the answers to these questions in the next upcoming episodes. (Also, now that I’m watching this again Kai is so awkward omg lol but his awkwardness is what makes him so cute). 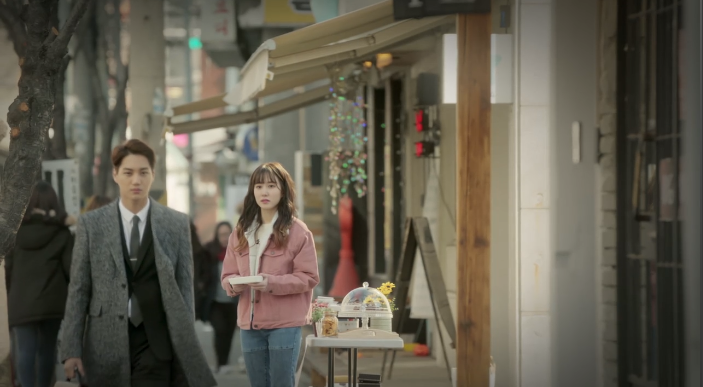 I’m not really sure what to make of Dal-soo’s appearance. As I had commented in my episode 2 recap, I had wished that we could have just stuck with Eun-haeng and Cho Co as the only characters in the drama. I just wanted to watch the both of them help each other in achieving their dreams and goals in life without any interference from anyone else. Dal-soo’s not a bad guy, but I want to see what his purpose in this drama is. Why is he in the drama and what role does he serve in regards to Cho Co’s chocolate shop business or Eun-haeng’s life? Hopefully the drama will explore more of his story and background and give us reasons to root for him in the next few episodes as well. He’s a cute little brat who likes Cho Co and wants to win her heart, but I want to see more of him and not just this.