Ahh, love is painful. As G-dragon once quoted in his song ‘Without You’, love is painful. It truly is and our characters Cho Co and Eun-haeng experience this firsthand themselves this episode. Why can’t our two main leads just be able to like each other? Why do new obstacles keep coming their way? Will they (and I) ever be able to live in peace? 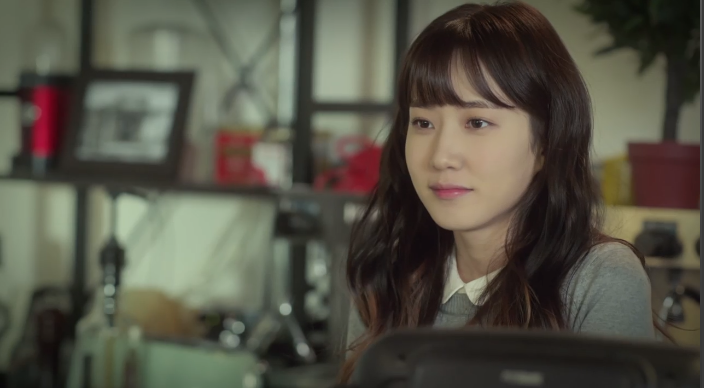 In episode 4, we discover how Cho Co slowly fell in love with Eun-haeng. Since he was the first person to give her chocolates a try and compliment it, he won a spot in her heart and she found new motivation to keep making chocolate. Whereas before she had a hard time waking up to bake, ever since their encounter she’s found it simple to wake up and make chocolate. She would keep baking and baking, waiting for the day that she would meet him again. That day eventually came and now they’re working with each other.

Fast forward to the present, Eun-haeng glosses over the shop’s sales while Dal-soo shows Cho Co a video that he made of Eun-haeng. In the video, Eun-haeng is seen helping customers at the shop and giving them financial advise and information. The lead actor of the video gets upset over it and complains about his privacy being invaded. But before he can do anything about it, a woman enters the shop asking for financial advise and support. Oops.

The woman is actually a journalist and wants to write about Eun-haeng’s daily life of serving as a financial counselor to many. She’ll also touch upon topics like unemployment and business start-ups and in return for her articles, the shop will get publicity and popularity. Cho Co is hesitant in accepting the proposal, but Eun-haeng and Dal-soo are in for the deal. 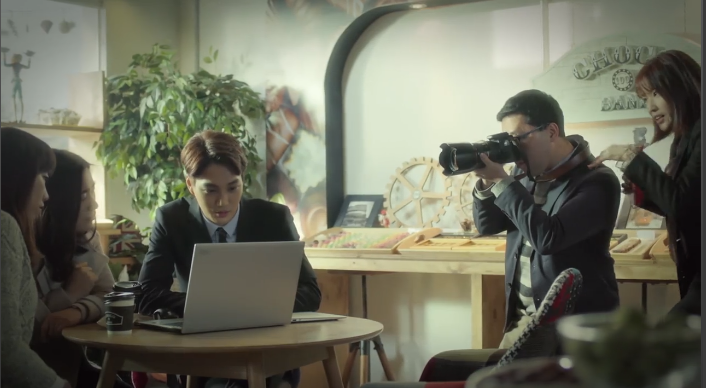 It’s a busy day for Eun-haeng as the journalist gets started on the project. While the journalist originally started out as just a witness to all of this, she herself ends up getting financial advice from Eun-haeng. Haha.

Everything seems to be going well until Eun-haeng receives a call from his mother who reveals to him that she’s in town to visit him. He panics and sets out to find his mother and stop her from entering his falsely-claimed workplace. He finds her just in time and rushes her to go back home. Mom hands her son the food she prepared him, but Eun-haeng refuses to take it lying that it’ll leave a smell at work. Sad, Mom accepts her son’s request and walks away.

Later on that night, the journalist holds a meeting with Eun-haeng, Dal-soo, and Cho Co. The journalist is less interested in her job and more interested in Eun-haeng’s love life. She asks him if he’s taken to which Cho Co spits the water in her mouth out, taken aback by the sudden question. The journalist pushes herself towards Eun-haeng to get a response from him, but the only person he’s responding to is Cho Co. Cho Co puts him down and questions why the journalist would be interested in an unemployed man like Eun-haeng. Hahaha. Says the one in love herself.

While Eun-haeng is hurt by Cho Co’s harsh words, the journalist goes ahead and asks for Cho Co’s permission to date Eun-haeng. She can tell that Cho Co herself also seems to have feelings for Eun-haeng so she just wants to check to make sure she can make her move on Eun-haeng. But Cho Co lies and declares that she doesn’t like him at all… when really she does. Before the meeting ends, the journalist hands Eun-haeng a business card of the director of a bank who Eun-haeng had met earlier that day at the shop. She gives him details about an interview that is already set up for him the next morning.

After the meeting, Eun-haeng waits for Cho Co as she closes the shop. She follows up on whether he’s going to the interview or not to which Eun-haeng reveals that he is. Cho Co looks at him in disappointment and pain.

I think we finally received some kind of proof or confirmation that Eun-haeng does in fact have feelings for Cho Co. When she had stated that she didn’t like him, Eun-haeng seemed disappointed. He even asked her if she was speaking the truth. For him to ask her if she’s speaking the truth reveals that he’s interested in her and is hurt by all the harsh words she’s saying about him as well as her false confession that she doesn’t like him whatsoever. He didn’t want to hear those words and yet he did in the end. It was a sad and painful thing to watch and listen to just because you know Cho Co was lying.

Dal-soo once again didn’t do too much in this episode, but maybe things are better that way. He’s a cute little adorable guy but I don’t think we’re going to get too much out of him in this drama. There’s not much damage done anyways with this decision because he’s our second male lead and he’s much cuter when he’s not rambling or whining. I like Yun Joon-suk who plays him (what he has been up to anyways? he used to be in dramas quite often but now I don’t see him anywhere 😦 ), but his character not that much.

I’m so foolish because it wasn’t until this episode that I finally understood why this drama is called ‘Choco Bank.’ Our characters are literally working at a chocolate shop and Cho Co herself is the owner of a chocolate shop while Eun-haeng is an expert at giving financial tips and advice. When you combine the two you get a title based on both chocolate and bank. It all makes sense! Haha. It’s a cute little combination and has even more meaning when you realize (like I finally did) what the two words mean.