Aww, I’m gonna miss this drama. It was so simple but endearing and easy to watch. Almost everything about this drama was perfect and it totally exceeded my expectations. I came in watching this drama with no expectations and left feeling mind-blown. It’s always bittersweet bidding farewell with a drama that provided you with such warmth, happiness, and joy.

As expected, everyone in the drama got a happy ending. Our three couples were able to overcome their obstacles together and reach a sense of understanding about each other that they might not have had before. For Se-hee and Ji-ho, they affected and impacted each other so much to the point where they realized that contracts can’t keep them apart but rather is what keeps them bounded to each other instead. Ho-rang and Won-seok also learned to accommodate and compromise on each other’s needs and wants without giving up so much of what they wanted as well. A little separation and break was what the two needed to learn and grow which I’m glad the drama gave them and showed to us viewers. Soo-ji and Sang-gu’s relationship was probably my favorite because they were such opposites but we slowly got to see Soo-ji open up to Sang-gu and tear down the walls she’s built just for him. She was so wary and cautious around men and was always an independent and strong woman, but she let him into her world and adjusted her life with him in it. Whereas before she was hesitant and afraid of doing so, we see that in the last few episodes she breaks the boundaries that she had created for herself and was created for her and learns to live her life a little bit more freely. It was relieving witnessing this change and transition in their relationship.

The last few episodes of the drama was so interesting and engaging. I really liked the plot of bringing back Se-hee’s ex-wife, Go Jung-min, into the picture because that gave us a better understanding of the family relations between Se-hee and his father as well as what exactly influenced Se-hee’s stoic and robotic personality. It was like a makjang, but it didn’t feel or look like a makjang which is what I appreciated the most. Because the writer and the director worked so well in conveying their messages and putting the drama together, you never really felt like it was a melodrama. Having Se-hee’s ex-wife back into the picture was dramatic and made everything so much more intense and interesting because you didn’t know what was going to happen to Ji-ho and Se-hee’s relationship or you didn’t know how Se-hee was going to react. It could have downhill having Jung-min both back in Se-hee’s life and also being Ji-ho’s potential employer, but the drama knew how to work its way around that and knew exactly what it was going to do with this plot. Instead of being upset and dreading Jung-min’s appearance in the drama, I was anticipating how her character was going to affect and impact the drama. It was the last straw that tested Se-hee and Ji-ho’s relationship before they made the final decision to end everything. Jung-min’s character was a good test that really assessed the limits to Se-hee and Ji-ho’s relationship so that was so satisfying to see.

In the final and last episode, the scene that got to me the most was when Ji-ho was laying on the same bed as Se-hee where Se-hee thought he was dreaming of Ji-ho again. I don’t know what it was, I don’t know what it is about dreams (a similar scene involving Ma Yi-deum’s dream in ‘A Witch’s Court’ also made me really emotional), or why it made me feel this way, but that scene got me in tears. My heart hurt so bad and I wanted to cry. That scene really demonstrated how much impact and change Ji-ho’s made in his life. He came out of his shell and the walls and boundaries that he created to protect himself came down in that scene. He used to be so stoic, calculated, and robotic, but now he dreams of Ji-ho and he’s telling her that he misses her and wants her back in his life. If this isn’t love then I don’t know what is. Haha. Talk about character growth and development too. By the end of the drama, Se-hee’s such a new person that even his peers and co-workers are surprised by the sudden shift in his personality. This just demonstrates how impactful Ji-ho has been in his life and I think this impact is one that he is grateful for.

While I do have positive thoughts and feelings about the drama in general, I do think it was a little too slow for me. It started to slow down towards the end of the drama which made me lose a little bit of interest. Although I watched all the episodes towards the latter end, I found myself getting distracted and not being as attentive as I was compared to earlier in the drama. That’s not to say that the quality of the drama got worse, but I do think it got too slow for me that I couldn’t sit through the entire hour and keep my eyes glued to the screen. There’s things happening and there’s progress or changes being made, but I think the thing about the latter end of the drama was that it just got too repetitive. There were usually flashbacks and then monologues (sometimes a few in each episode) constantly happening in each episode and I wouldn’t have a problem with this except it just kept on dragging on. Sometimes the sentimental monologues and reflections do have impact and can work, but you have to build up to that and there has to be intentions behind it. Also, having too many monologues in one episode can hurt and take away from the episode more than help it. Yes, the monologues were well-thought out and were sentimental and wonderful, but after a while it just got too long for me. This was probably one of the bigger reasons as to why I started to not be as devoted to the drama towards the latter half. 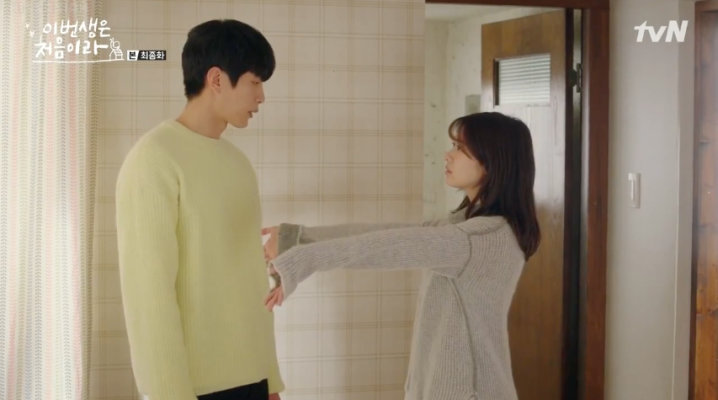 This drama helped me re-discover Lee Min-ki again who I’ve always been a fan of, but haven’t seen him much in. This drama showed me that he has potential for comedic timing. While his character was for the most part stoic and emotionless, there were times where just a small bit of reaction or response from him evoked laughter from me. It’s a shame that Se-hee started to change towards the end of the drama (although that’s really the point of this drama) because I would have loved to see more ridiculous and silly reactions from him throughout the drama. I’m glad that Lee Min-ki was able to return from the army with a successful project and although it’s probably going to be a while until we see him on our screens again, I’m really hoping that this break isn’t too long because I want to see him in another drama or movie soon! This was my first time ever watching Jung So-min in any of her works. While I still remain neutral about her, I think she’s cute and talented and I’m glad to be seeing her in more works. Her last project ‘My Father is Strange’ was also a hit so I’m glad that her projects have been successful. The rest of the cast was also just as charming. I’ve seen Esom in more movies than dramas so I was really surprised to see her in this drama. I think she did a really great job and brought so much life into Soo-ji that I’m not sure any other actress would have been able to do. Bomi was also really cute in this and she was so natural as her character. ‘Because This Life is our First’ was such a raw, realistic, and honest drama about relationships. Whether it was 7-year relationships, contractual relationships, or even relationships with your family and friends, this drama taught us that you never really know the person you’re in a relationship with as you might think you do. As with everything else, relationships take a lot of work and effort and you have to be committed to investing the relationship if you want things to work out. There’s going to be challenges and obstacles you’re going to face in the duration of this relationship, but it’s up to you two as to how you’re going to overcome them. I really appreciate this drama for how simple and endearing it was and while I don’t think I’m going to re-watch this drama anytime soon, it’s going to be one that will remain in my heart and mind for a while.