It’s rare to come across Korean dramas I’ve never intended to watch, but then watch and totally fall in love with it to the point where I marathon all the released episodes. And that is exactly what happened with finished ‘Go Back Couple’ starring Jang Nara and Son Ho-jun.

As one of the many dramas included in that big rush premiere of Korean dramas, ‘Go Back Couple’ wasn’t a stand-out to me and rather was forgotten. But one day while waiting for the new episodes of ‘Because This Life is Our First’, ‘Mad Dog’, and ‘Witch Court’ to air, I thought I’d give ‘Go Back Couple’ a try. I didn’t know anything about it and am not the biggest fan of any of the cast members, but I thought I’d watch it to keep me occupied.

Little did I know just how charming, realistic, and lovely this short 12-episode drama would be and how much of my time would be dedicated to it. The first episode was a real scene stealer, intelligently showcasing us the issues and conflicts of Jang Na-ra and Son Ho-jun’s marriage and demonstrating to us what happened that caused them to travel back in time for a second chance at life. The concept of time-traveling isn’t new and we’ve seen this plenty of times in K-dramaland. However, ‘Go Back Couple’ utilizes this plot to their advantage and plays with it. It was fun watching Jang Na-ra’s character Ma Jin-joo and So Ho-jun’s character Choi Ban-do pretend to not know each other at first and then eventually interact to make up for their future mistakes. In the process, they end up changing aspects of their life that affect their future such as the situation with the evil and horrible doctor who only married the daughter of a rich family for the money or Choi Ban-do being there for Ma Jin-joo this time because he was unable to years later in their marriage which was what caused them to divorce (among many other reasons). You have two characters who return to the past – excited and desperate at a second shot at life so they avoid each other to later discovering that really who they want is still each other at the end, but just a second chance at fixing their relationship. It’s this beautiful discovery that makes you engaged because it’s so subtle and happens in the smallest of forms like Choi Ban-do doing things for Jin-joo’s mother or our leads growing jealous of each other. Although I knew that Ma Jin-joo was going to end up with Choi Ban-do in the end, another part of me is also curious as to what it would have been like had Ma Jin-joo end up with the second male lead Jung Nam-gil. He was your typical cold and tsundere guy secretly in love with Ma Jin-joo, but he was also kind and caring towards her and wanted the best for her. I wanted Ma Jin-joo to make up with Choi Ban-do, but I also knew that Nam-gil genuinely liked her and cared for her so I was conflicted on who was better for her. Maybe she would have been happier if she had chosen Nam-gil, but her heart was telling her otherwise. Having seen the history between our two main leads and also knowing that they still secretly loved each other but were just too stubborn to admit it made me root for them.

While the drama for the most part leaves me with good memories and happiness, there are two things that I wished could have been better: the Seo-jin plot & the aspect ratio. Whenever the drama wanted to show us something from the future (since they traveled back in time), they would show the scene in a slightly different color and the characters would look squished on screen because the aspect ratio was different. This bothered me because I didn’t like this change in the aspect ratio. I would have preferred if the drama had just filtered these scenes in black and white or in some other different color than to change the aspect ratio because it kind of distracted me from paying attention to the scene (it’s the same issue that ‘Signal’ faced). Additionally, while I love Seo-jin and he’s an adorable, jolly, and cute baby, I do think the plot involving him felt a little empty. There were many times where our leads felt conflicted to return to the future because they liked how they were in the past which meant a second chance at doing things right and differently, but which also meant leaving Seo-jin behind. I felt like if the drama had showed us earlier in the drama scenes of the family spending time together, doing things together, going out and spending time with each other’s family and friends, and really just showing us of them as a happy family, I would have been able to better empathize with our two main leads about their emotions when they thought about Seo-jin. But the drama didn’t show us these scenes until the latter half of the drama which then left less of an impact and effect on me because yes, while I was sad about Seo-jin and wanted the baby to reunite with his parents, a part of me also wished that the drama had devoted just a little bit more time to this certain plot especially since they had emphasized on it quite often. Seo-jin was really the only reason why our two leads returned to the future and while I think it’s great that they came back for their child (parents would do anything for their children), the entire plot felt a little flat for me.

I am a little upset that the drama decided to use the typical car accident and hospital plot towards the end of the drama just because everything else before it was so fresh and well-done. Why did it have to go that route? Why?! It didn’t bother me too much though because everything else about the drama was fine so I wasn’t too upset and mad that Choi Ban-do got injured in a car accident to protect Ma Jin-joo. I just wished that it really didn’t go there, lol. However, sometimes things don’t change until something drastic happens so I could understand why the drama decided to use this cliche trope. I just wished that it didn’t lol.

I’m glad that the drama was 12 episodes because I felt like everything was well-paced. ‘Go Back Couple’ is a good example of a drama done right: it was well-paced, beautifully filmed, smoothly edited, musically satisfying all in 12 episodes. There weren’t any unnecessary drama or scenes and everything was done with intent and purpose (much like ‘Because This Life is Our First’). It was to the drama’s benefit that it wasn’t originally 16 episodes (though I wouldn’t have mind if it was because I love all the characters so much) because there wasn’t enough story to carry the drama to make it last that long (the drama had to pull the cliche car accident trope because it was running out of ideas and story). So in a way, it was a good thing that the drama ended with 12 episodes instead of the usual 16 because there was no room for unnecessary fluff and everything was well-paced. Now if only all dramas was like that.

The aspect that I appreciated the most about ‘Go Back Couple’ was just how funny it is. The drama had such great comedic timing and I think this was partly due to our cast members being so great as well. Son Ho-jun especially stood out to me because his character was such a jerk at times, but the way he executed his character made me not despise him as much as I should have. He was so charming in this drama and I can’t describe just how much he made me laugh with all his reactions and expressions. He kind of reminds me of Jo Jung-seok in the way that they both have such wonderful comedic timing and are so funny in whatever they do. Supporting characters like Choi Ban-do’s two best friends were also so funny in their own respective ways so the three of them together were the highlights of this drama for me. 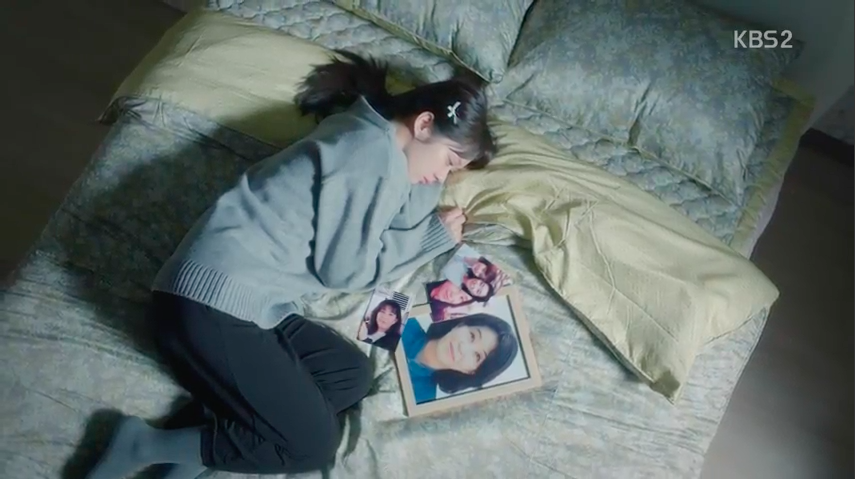 Another aspect of this drama I deeply appreciated and cared about was the parent-children relationship. Ma Jin-joo’s mom had died a few years after her marriage and she regretted not being able to spend her mother’s last few minutes of life with her. Once she returns to the past, she takes advantage of all the time she has with her mother while her mother is alive and really demonstrates her love and appreciation for her mother which was so touching to me. In episode 12 when Jin-joo’s mother requested for Jin-joo to take care of her dad once she passes away absolutely broke my heart. It didn’t help that the drama actually showed scenes of Jin-joo’s dad – in the future – waking up by himself, watching the TV by himself, and living in the house alone and empty. It made me reflect upon my relationship with my parents and family and how precious your time with them are. I cried like a baby seeing that scene and I don’t think I’ll ever get over it. One of the best scenes I’ve ever watched in a drama.

Through this drama, I’ve come to re-discovering Son Ho-jun who I remember most from ‘Reply 1994.’ He was so funny and great in this drama and while I do think he has better comedic acting than say melodramatic acting that was required of him in this drama, he did do the scenes where he cried or was sad decently. He proved to me that he can do both well and I’m glad that he was able to showcase these skills with this drama. I also discovered model and actor Chang Ki-yong through this drama who’s a model with YG’s model label YG K+ (YG be stocking up on all those models) and did a little research on him after watching him in this. While he’s not on the same level as his colleague Nam Joo-hyuk, I do think he’s finally starting and will eventually get there one day. He’s working his way up slowly and has been appearing in more dramas so I’m anticipating to seeing him in more dramas and movies alongside his modeling gigs. While I don’t have an opinion on Jang Nara, she was cute in this drama and portrayed her character well. She cried a lot towards the latter half of the drama so her eyes were super puffy and red, but she cried so well and you could feel her emotions as she wept and bawled for various reasons. Overall, the cast was well-casted and great in their own ways. 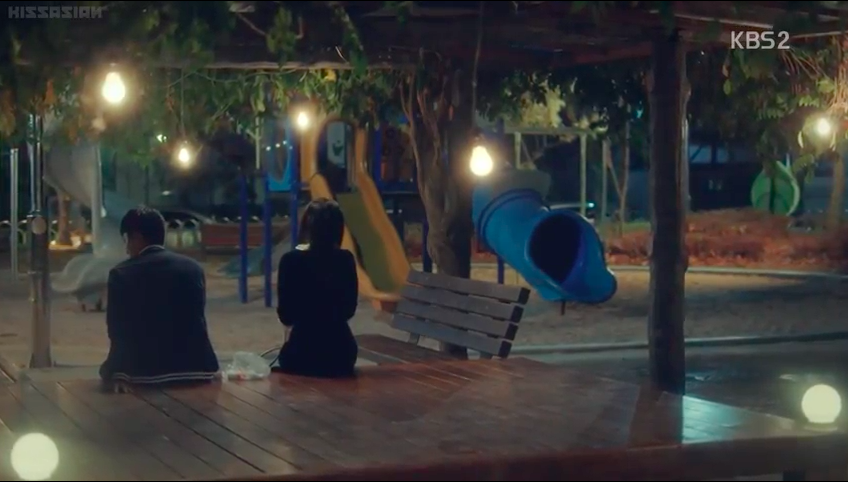 Since ‘Go Back Couple’ was only 12 episodes and well-done, it’ll be one of those dramas where I’ll go back and watch it again. Something about it just sticks to me. Maybe it’s Jin-joo’s appreciation for her mother when she travels back in time or it’s the friendships between Jin-joo, Ban-do, and their friends that resonates with me. Whatever it is, ‘Go Back Couple’ was unexpectedly a charm for me and I’m glad that I gave it a chance. The drama won’t need to travel back in time to get another shot at impressing me because it’s already done that its first time around 🙂