Before another episode of ‘Running Man’ airs in just a few hours, I thought I’d discuss my thoughts and opinions on the latest two episodes. Episode 410 starred Mission Impossible Fallout cast Tom Cruise, Henry Cavill, and Simon Pegg. Meanwhile, episode 411 had no guests but instead just featured the Running Man casts who all try to discover the thief behind Jong-kook’s stolen shoes.

This episode was mainly built around the special appearance of actors Tom Cruise, Henry Cavill, and Simon Pegg. Contrary to what I had expected, the three actors only appeared in the episode towards the very end since they were only given an hour to film (which is not a lot of time). Given the tight and short schedule that the actors were on, I still think Running Man did a wonderful job in keeping the guys busy and entertaining them. You can tell that by the end of the episode they enjoyed filming and did really have fun. I think it was wise and smart of Running Man to have them play simple and memorable games that Running Man is known for. Granted, they only had an hour to film with the guests so it’s not like they could have done a nametag elimination game or could have gone outside, but I still like that the show stayed true to itself in the end.

The games leading up to the appearance were great as well. The ASMR food game where they had to eat food as quiet as possible under a certain noise level or else they would get punished was entertaining. I laughed out loud at Kwang-soo and Jong-kook’s revenge tactics to get back at each other or how Se-chan was still attempting to act so carefully even though it was clear that he and Haha had already lost. The second game wasn’t a favorite of mines. It was one of those complicated, messy, and unnecessary games where there’s too many details, too many rules, and too much going on. I’m glad that the episode picked itself up by entertaining the guests and us viewers towards the end.

I’m disappointed but not surprised at how Running Man chose Ji-hyo as the leader of the other agent group. To me, it just felt so lazy. Ji-hyo barely plays any special roles so Running Man felt like they were doing something by giving her a special role in this special episode. However, her role was small and futile. She really didn’t do anything this episode and she wasn’t even given the chance to really play her role. I felt like Running Man just wanted to give Ji-hyo a role so that it would seem like they cared about her or as if she was finally given the opportunity to do something on the show. Ji-hyo hasn’t done much on the show for a while now which is why no one expected her to be the leader. Even newbies Sechan and Somin played a much bigger role in this episode which was nice because they still need that exposure, but not at the expense of another member.

Overall, the episode was fair and surprisingly not too over the top. It’s an episode I can see myself skimming through again when I’m bored and in need of something to watch. 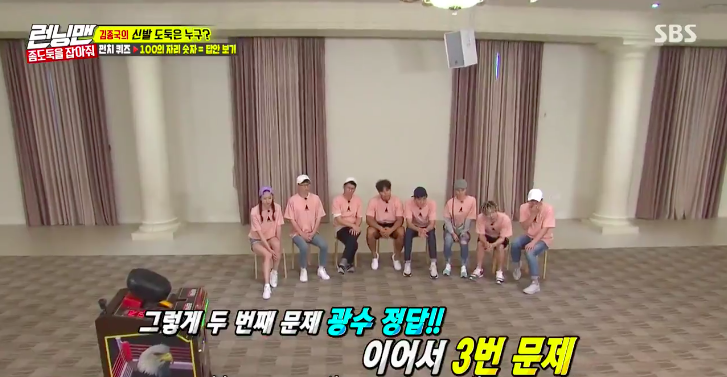 I’ve always been vocal on my opinions regarding guests on Running Man and how I prefer it when the show doesn’t have any guests and rather just focus on the eight fixed cast members. Episode 411 was luckily one of those episodes without any guests which I was satisfied with, but the episode just unfortunately did not do it for me.

The staff production team must have ran out of ideas because the premise behind this episode was to find the thief who stole Jong-kook’s shoes. Although I might not enjoy all of Running Man’s themes and ideas for their episodes, this one was one of the ideas I was the most puzzled about. There wasn’t much going for them or anyone in this episode and I just felt confused at how empty it felt. You have the brilliant and funny cast members engaging in games and missions to find the thief behind Jong-kook’s stolen shoes, but there was just something about this premise that threw me off. Once again, it felt lazy and odd to me to have his shoes out of all things be stolen. Anything else would have been fine with me, lol.

Even then, what was more disappointing was the fact that it was a 1 vs. 7 kind of game. Anyone who’s followed and watched Running Man to this day knows how smart and alert Jong-kook is. He has good instincts and he’s a strong powerful man who can overtake almost any of his enemies. I was a bit disappointed that the production team would pit him against the rest of the cast members because it’s obvious who will win. And as we all expected (and the Running Man cast members did too), Jong-kook won in the end.

This episode was definitely a filler episode where the staff lacked creativity so they resorted to something simple and minimalistic. Running Man has done a lot and I admit that they have some stellar episodes with great guests and all so they might have felt a bit tired (especially with the big episode the week before with Tom Cruise). However, I was left feeling disappointed with this episode for its lack of creativity and fun. The most entertaining portion was the game where they played a quiz game and had to hit the machine to answer correctly. Even then, there wasn’t much going on. There wasn’t a lot going on this episode overall and it could have been better. Here’s to hoping this is just a short drought and the show will pick up where it left off on the Tom Cruise episode with upcoming episode 412.