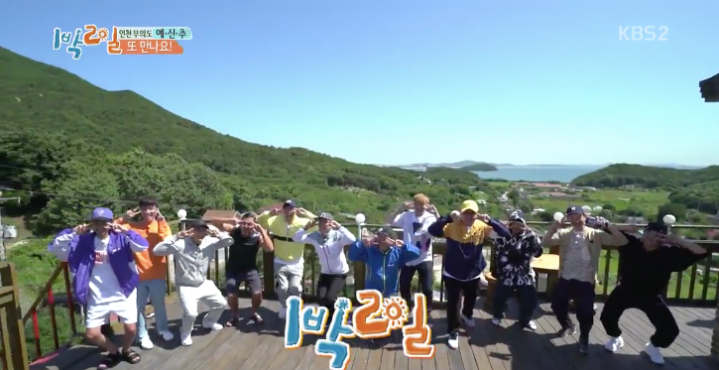 Here’s finally my post on another variety show other than ‘Running Man’! I’ve been keeping up with ‘1 Night 2 Days’ as much as I’ve been watching ‘Running Man’ so I thought I would discuss my thoughts on the latest episode of 2D1N which was the ‘Variety Newborn Special.’

The ‘Variety Newborn Special’ was a 3-episode series where each cast member invited a colleague as a guest on the show. Out of all the six cast members, my favorite ones were Lim Joo-hwan (just because it’s Lim Joo-hwan ASKDJFD. I love him!) and MMA fighter Bae Myung-ho who Yoon Dong-gu invited onto the show. I’m not surprised that Cha Tae-hyun invited Lim Joo-hwan since they’re both actors and are probably in the same circle of friends (honestly I was looking forward to who Cha Tae-hyun was going to invite the most because he has really good connections to top actors like him and man did he not disappoint in this episode again. He was the one who invited Jo In-sung a while back). Myung-ho turned out to be such a cute and pleasant surprise to the show. Contrary to his appearance and career, he was actually so cute and adorable and I can see why he’s friends with Yoon Dong-gu (who is also just as equally cute and adorable).

2D1N did something similar to this a few years ago when each cast member also invited their friend or colleague onto the show and headed to the same island that they did this time around. However, the only difference were the guests of course, but the premise for the most part was the same. Overall, the trip was fun and had a few good comedic highlights, but that was about it. I found Se-jin’s fanboying over Tiger JK one of the biggest highlights to me because he was so nervous around the legendary rapper and really adored him. You can tell that Se-jin genuinely liked Tiger JK and was a fan of his so that was so nice to see (he lost games against Tiger JK on purpose so they could exchange phone numbers, like c’mon! If that doesn’t prove he’s a big fan of Tiger JK then I don’t know what is. Askdjfd). Plus, Se-jin is a pretty good rapper! I wasn’t expecting him to rap that well since he’s a comedian but damn, he got skills!

The show brought back the fishing job again this time which was entertaining to watch. Nothing too out of the ordinary since there wasn’t a lot going on during the fishing trip. The funniest part from the fishing trip was Junho waking up the the rest of the guys with the fish that they had caught, haha. Also, I was so happy to see Brian back on a variety show because he’s seriously so funny and I recall watching him with Jong-min on variety shows back in the days. They were known to be the funny comedic duo on variety shows. So much has changed within a decade and it’s unfortunate that Brian isn’t as active as Jong-min anymore. They’ve since gone their own separate ways so it was great seeing them together again even if Brian didn’t do all that much with this appearance.

Overall, the 3-part trip was fun and cute and I think each guest had a pretty decent amount of screentime (more or so depending on if they were funny or not but still). I was a little disappointed that Jung Joon-young and his guest Young-bae didn’t stay as on the island for as long as they should have, but it’s okay. Rejoining the rest of the guys was the best option in the end, lol.

Running Man returned this time with another usual episode of half guests and half cast members. Just like their other episodes, the cast members were paired up with each other and then invited guests onto the show that specifically matched the theme of the episode.

Out of all the guests, my favorite would definitely have to be Sung Dong-il. He was so so funny and entertaining and it was so funny watching him mess around with Kwang-soo. He pretended he would help Kwang-soo and be on his side, but instead was really just playing around with him. The moment he entered the building was intimidating, but the way he wiped his hands on Kwang-soo’s shirt after washing his hands helped lighten up the mood. He also showed bits of his role as Presiding Judge Han from ‘Miss Hammurabi’ by teaching Kwang-soo a rightful lesson for his cheating habits and for not playing by the rules. The entire segment with Sung Dong-il was hilarious and even the moments leading up to his appearance was funny. Kwang-soo apologizing to actor Park Jung-min for what happened last time with pretty much being edited out of the episode despite having traveled so far on his motorcycle. Asdkfjd. Kwang-soo please! Also, So-min running out onto the streets with only her socks on with the box Kwang-soo needed to complete the mission was hilarious as well. 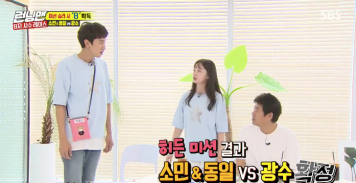 Jang Do-yeon was another standout of the guests, but that’s expected because she’s a talented comedian. She sure is tall with huge feet and Kim Jong-kook and Yang Se-chan sure did remind her (and us) of those odd details. Asdkfj. Jang Do-yeon was cute and I liked her appearance as well.

In the end, Jong-kook ended up winning (I’m not even surprised. The winners are usually either Jong-kook or Yoo Jae-suk with wins from the other cast members here and there). He’ll have the special opportunity to change all 8 member’s profiles and images on Naver, Korea’s biggest web search portal (kind of like the ‘Google’ in the U.S.).

There’s been episodes like this one that’s been done on the show before so I find it interesting that the show is starting to recycle and repeat the same premises for the episodes but with just a different theme and different guests. I don’t mind that the show is repeating the same ideas, but I can’t help but wonder if the show has run out of ideas because they’ve been employing the same ideas, games, missions, etc. every other few episodes. I anticipate another global mission trip again with a set of new guests if this keeps up. Lol. Regardless, Running Man stands out more when it’s just them cast members alone, but I wouldn’t mind more guests if they were all just as entertaining and fun as Sung Dong-il was in this one.