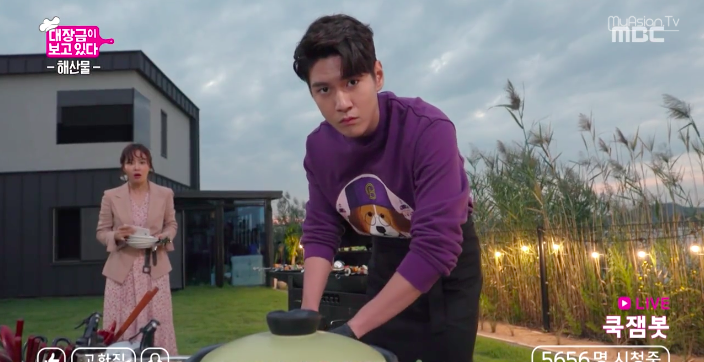 Seung-ah and San-hae eventually find themselves spending more and more time with each other and getting to know each other more in the process. However, San-hae’s not the only one who knows about Seung-ah. Jin-mi and Jung-sik also eventually learn how they’re connected to Seung-ah and get to know her more too.

After accidentally ripping San-hae’s jacket apart, Seung-ah worries back at home on how she’ll fix his jacket. At that moment, San-hae calls Seung-ah to invite her to join him on a trip to a port near the sea. Seung-ah happily accepts and assumes the two will be going on a date. She packs her belongings inside a suitcase excitedly and smiles at the thought of the trip. Meanwhile, Jung-sik worries about his powers and abilities. He recalls the moments the night before when Seung-ah wasn’t in pain after holding his hands. Usually, others would be burning with heat and pain, but Seung-ah wasn’t. Jung-sik grows worried that maybe he’s lost his powers.

The next morning, Seung-ah meets with San-hae outside of her apartment building. He has her drive since he has some important work to finish on the way to the port. He also explains to her that they’re going on a business trip to meet a client, but that they can grab some food at the port before leaving back home. Seung-ah grows content with the news and sets out with San-hae.

Jung-sik tests his powers on a sleeping Jin-mi. Unlike his encounter with Seung-ah, Jung-sik places his hand on Jin-mi and causes a red burn on her leg. She kicks him in pain and gets her revenge on her brother for the burn. Jung-sik’s powers still work on other people. Back in the car, San-hae receives a call from Manager Lee who wants him to visit her at the hospital. However, San-hae informs her about his business trip with Seung-ah so she finalizes plans to set out to the port as well. She recruits Won Bin to go with her so that he can distract Seung-ah while she have quality time with San-hae.

Seung-ah and San-hae arrive at the port. However, San-hae is asleep since he barely got any sleep the night before. After gushing over San-hae’s handsome face, Seung-ah attempts to recline his seat to make him more comfortable. Things are going well until she accidentally falls onto him herself, waking San-hae up from his sleep. He finds Seung-ah laying on him and calmly asks her to sit back up. She quickly does as he asks and avoids the awkward situation by exiting the car. Won Bin and Manager Lee also head out for the same port as Seung-ah and San-hae. They eat some of Won Bin’s fried rice tofu balls on the way there and note the strange sour taste to it, but they don’t think too much about it.

Seung-ah and San-hae find themselves struggling to meet with their busy client. Their client continues to postpone the meeting so the two have no choice but to wait at a cafe nearby until the client is available. Meanwhile, Manager Lee and Won Bin finally understand why the fried rice tofu balls tasted so sour. They were expired and had gone bad. The two start to suffer from bad stomachaches and stop by the side of the road to relieve themselves of their pain. Manager Lee shares with Won Bin a piece of the bandage wrapped around her hand which he uses as toilet paper. Lol. Poor them.

San-hae contacts his siblings and asks them to meet up with him instead since he won’t be able to make it to dinner because of his business trip. Jin-mi and Jung-sik set off on the road trip using Jung-sik’s brand new car where Jin-mi carefully drives the vehicle. However, she’s not careful enough and the two land up in another town. Thankfully, there’s a festival going on and the two agree to visit the festival to buy some more ingredients they can use for dinner that evening. Back at the port, Seung-ah and San-hae finally meet with their busy client. As a sign of gratitude, the client invites them to stay the night at one of her many pensions. San-hae hesitantly accepts the offer since he’ll be needing a place for him and his siblings to eat dinner.

Jung-sik and Jin-mi have fun at the festival, but the two must make their way to San-hae for dinner. Seung-ah and San-hae wait at the pension for his siblings to arrive. Seung-ah assumes it’s just the two of them, but San-hae breaks it to Seung-ah that his siblings will be joining them. Seung-ah at first is disappointed upon learning the news, but grows excited afterwards. Maybe San-hae will be introducing Seung-ah as his girlfriend to his siblings. Maybe it won’t be so bad that they’re joining for dinner after all.

Jin-mi enters the pension first to drop off some stuff. She’s introduced to Seung-ah and asks her to give Jung-sik some plates and bowls. He’s outside in the backyard doing his cooking livestream. While Jin-mi grows suspicious of San-hae and Seung-ah’s relationship, Seung-ah heads outside to give Jung-sik the plates and bowls. Jung-sik is occupied with his cooking livestream until he notices a woman standing behind him. The woman is none other than Seung-ah! Lol.

He quickly turns off his live stream to confront Seung-ah. They eventually find out that they’re both connected to each other thanks to San-hae. The world sure is small!  Jung-sik shakes Seung-ah’s hands again to test his powers on her and just like all the other times, Seung-ah doesn’t flinch. She doesn’t feel her hand burning. Jung-sik eventually finishes cooking and the quartet have a delicious dinner later on that evening. 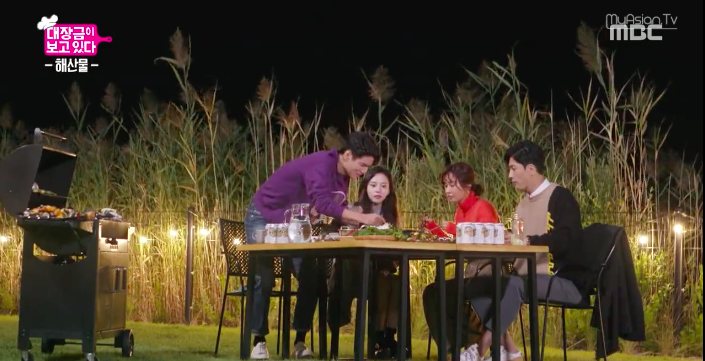 Throughout the dinner, the three siblings teach Seung-ah how to best eat the food. Along with tips and advice, both San-hae and Jung-sik care for Seung-ah. Jung-sik especially continues to give Seung-ah food on her plate which frustrates Jin-mi. She ends up leaving the table early in frustration and storms back into the pension. To fill up her stomach, she grills the beef she bought from the festival earlier that day and also video calls Min-hyuk to keep herself some company. Though the two aren’t physically with each other, they still enjoy each other’s company through the phone.

Back outside, Jung-sik asks Seung-ah questions related to heat to conclude why she doesn’t feel any heat when he holds her hand. However, their conversation is interrupted by San-hae so the topic turns to him. Jung-sik brings up San-hae’s dating history and gets into details about San-hae’s past relationships. Jung-sik reveals that San-hae’s ideal type is someone like Yoona of Girl’s Generation, not Yuri. Hahaha. San-hae eventually gets Jung-sik to stop talking by having him make amends with Jin-mi back inside the house.

With just Seung-ah and San-hae left, Seung-ah drinks to her heart’s content and goes on a ramble about her looks and physical appearance to San-hae. She clearly wants to be similar to his ideal type. San-hae doesn’t say much, but shows through his actions instead how he feels about her. San-hae advises Seung-ah to stop drinking so she takes a break by getting some fresh sea air instead. She almost pulls San-hae in for another kiss again, but stops just in time so their lips don’t meet.

San-hae follows after Seung-ah as she stumbles on the ocean shore. She eventually sits down across from him and rambles again about all the times he’s made her heart flutter and nervous. She grows frustrated and pushes him away, but she eventually finds herself on his back as he carries her back to the pension. Seung-ah – a little too drunk to hold her tongue and her feelings – confesses to San-hae that she likes him. San-hae stops walking upon hearing the confession and reacts in shock and surprise.

The ending statement for the episode recites:

Come here, let me play with you on my back. Oyster alssam. Spicy seafood stew. They are my love. It’s love. It’s my love. 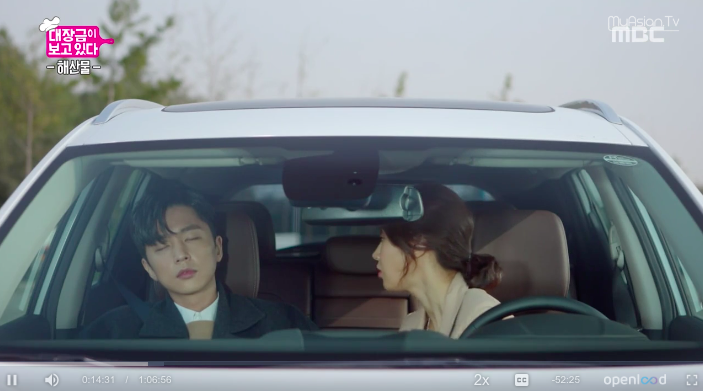 GAAAAH, what is your response San-hae? Is it a yes or no? I’m loving the ending of this episode though, primarily because we got Seung-ah’s bold confession out of the way. I don’t expect San-hae to reciprocate her feelings back to her so easily; I assume it’s going to take a little bit longer for him to fall in love with her, but when he does, it’ll be oh so sweet and adorable.

I had a few doubts and concerns with the last episode and the direction that the drama was taking us so I’m glad that the drama didn’t take us down the path I assumed it was going to. There wasn’t a love line between Jung-sik and Seung-ah in this episode (though they were still affiliated with each other and met a few random times) and Jung-sik even helped Seung-ah out a little bit by talking to her about San-hae. I hope the drama keeps this up and establishes Jung-sik as Seung-ah’s sidekick who helps her win over his brother’s heart. That way, they can still be affiliated with each other, but won’t become involved in a love line with each other.

Manager Lee and Won Bin are obviously placed in this drama for comedic relief and while I myself don’t mind their scenes, I actually feel indifferent about their characters. I actually find their obsessiveness with Seung-ah and San-hae a little too creepy for my liking. The way that Manager Lee always wants to spend time with San-hae without taking into consideration his feelings or time or the way that Won Bin approaches Seung-ah so desperately. It’s a little off-putting and creepy, but I like that the drama comes up with hilarious antics that prevents the two from accomplishing their goals. As seen in this episode, the two wanted to spend time with San-hae and Seung-ah, but ended up not being able to because they were occupied with other things instead (aka their stomachs).

I like that we saw another side of the family dinner in this episode than what we saw in the last four episodes. Instead of San-hae rushing home from work to join his siblings for dinner, they’re the ones who came to him this episode. It made for a nice change from the past few episodes and emphasized to us just how important the family dinner is to our siblings. Regardless of the situation, our family will still find the time and strategy necessary to convene for dinner since it’s required of them. Food always brings our family together and although it can be a little stressful at times, our siblings find a way to have their one meal together at the end of the day. In addition to the family dinner, I also love that Jin-mi and Jung-sik were introduced to Seung-ah in this episode. Although Jung-sik already knew about Seung-ah and vice versa, they weren’t aware that they were connected through San-hae. I also liked that although San-hae didn’t intend to introduce Seung-ah to his siblings, they all now know about each other which should make things much easier when San-hae eventually falls in love with Seung-ah. When that comes, he’ll be introducing her not as his co-worker and colleague, but his girlfriend.

‘Dae Jang-geum is Watching’ continues to remain an effortless watch, and I love just how simple and easy this drama is. I’m also enjoying the pacing and direction that the drama is taking us and the importance of food in this drama. Along with the hilarious SNSD comments and the family dinner at the end of the day, I especially can’t wait for Seung-ah and San-hae to spend more time with each other.