KARD returns with ‘You in Me’ 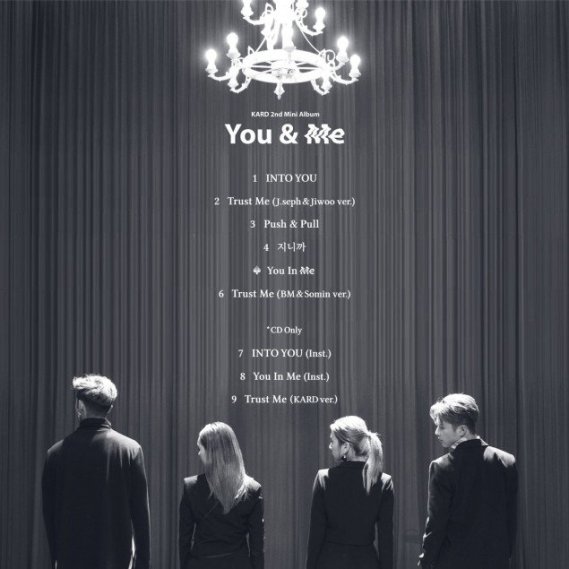 2017 has been an interesting year for co-ed group KARD. They made their first appearance last year in November with ‘Oh Nana’ and blew up internationally. They then returned with two other pre-debut tracks ‘Don’t Recall’ and ‘Rumor’ before finally officially debuting in Korea with ‘Hola Hola.’ The co-ed group recently made another comeback titled ‘You in Me’ to round up the year.

‘You in Me’ reminds me of another ‘Don’t Recall.’ Compared to ‘Rumor’, ‘Hola Hola’, and ‘Oh Nana’, it’s a lot more serious, dark, and dramatic. While I personally don’t think it lives up to the hype that ‘Don’t Recall’ was, it does have that distinct sound that makes you want to keep listening to it. Ironically, I wasn’t a big fan of the song at first, but now I can’t stop listening to it.

The MV hints to why the title track is called ‘You in Me’ and while I’m not a big fan of the MV and how it was filmed (the dramatic effects and the editing at the end of the MV was iffy), the song itself made up for the lack of impact from the MV. ‘You in Me’ would probably be my favorite after ‘Oh Nana’ and ‘Don’t Recall’ musically. The MV and choreography isn’t my favorite of theirs though and I actually hope that they hire a new choreographer for their tracks because this one really isn’t helping them at all. It’s unfortunate that my favorite KARD tracks are the first two that they’ve released, but I do think they have the potential to make music that is both public friendly domestically but also popular internationally.

KARD already has a huge fanbase internationally, having held tours around the world since their first appearance last November. This works to their advantage because even if they might not be making any money domestically, they can rely on their international fanbase to help alleviate their careers. However, it can still be difficult for the co-ed group to succeed if they don’t have at least some sort of success or recognition within their own home country so I hope that they can try to find that balance between catering to both Korea and international countries. Right now it seems like only international fans are really giving the group a chance which is unfortunate. This is going to be the challenge for KARD because everyone has different music tastes so they have to find a song that will get them that public recognition in Korea that will also allow them to keep their international fans. The good thing about KARD is that they have a sound and are confidently continuing that sound that defines the group, but maybe experimenting with different styles of music wouldn’t hurt at this point in their careers.