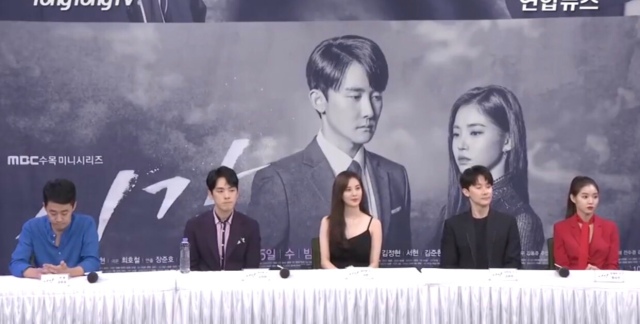 Ohhh noooo. Kim Jung-Hyun, what is you doing?

Not too long ago, I posted teasers to Kim Jung-Hyun and Seohyun’s upcoming drama “Time” and basically expressed my excitement for the new MBC show. The cast recently held a press conference for the drama and things didn’t seem to go too well for male lead Kim Jung-Hyun. Many claimed that he had an attitude during the conference and the most notable behavior was when he rejected Seohyun’s request to hold onto his arm to take pictures. He looked upset and uninterested during the conference which some criticized him for his attitude.

I watched the video of the press conference for myself and honestly, some people’s claims weren’t too far-fetched. Kim Jung-Hyun’s rejection to Seohyun’s offer was a little subtle and indirect, but it was still a little confusing why he wouldn’t want to take pictures with her. He stayed distant from her and the two barely had any interactions which is a little odd given that the leads of other any drama usually do in press conferences. Throughout the confernce, Kim Jung-Hyun did seem a bit down and indifferent about everything, but the reason why is not exactly sure. Maybe he was pretending to be like his character in the drama and thus was doing some method acting or he just had a bad day or an argument before the conference.

Regardless, he’s now in the spotlight because of his behavior at this event and it’ll probably affect him for a while. Although his behavior hasn’t done enough for me to stop being his fan or to not check out the first few episodes of the drama, his behavior was a little questionable and I’ll look out more in the future to see if he does anything like this again. Here’s to hoping there’s only good news about him in the future.